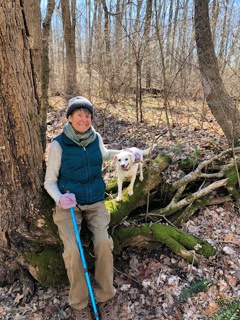 On Saturday, October 12th 2019, Sharon Lee Reese passed away at age 68. Sharon was born on September 29th, 1951 in Orange County, California to Elizabeth Anne Rumley and Shirley(Cowboy) Rumley. In highschool she was captain of the Tennis team and went on to earn a BA in Religion from Duke University. She continued her education at Emory University with an MA in Seminary, and later at Lindsey Wilson College with an MA in Counseling. Sharon was raised on the beach in both Southern California and North Carolina, and she drank a sip of salt water at every visit to the ocean.

Sharon was an infinitely resilient woman who always followed her curiosity. After college, she worked in restaurants as a cook and manager and built houses as a construction worker in Atlanta. At the age of 30, she purchased land in Kentucky to start a homestead farm where she raised tobacco and organic produce. As a single mother on the farm she raised her daughters, Margaret Elizabeth Reese, Rosalee Anne Reese, and Serena Ann Estes. In the 90’s Sharon came to Fayetteville to be closer to her parents. She was the head baker at Ozark Natural Foods Coop for 18 years and nourished all comers with delicious baked goods and an open heart. In her later years she welcomed another daughter into her heart, Kelsey Virginia Power, and
cherished her first grandson, Adam Michael Power.

Sharon was a pillar to the community and a friend to anyone that needed one. She fostered compassion and acceptance to all that crossed her path. She adopted countless dogs and
greatly enjoyed hiking them through the forests of the Ozarks. She marked the days of spring by
the arrival of wild flowers, relished the sounds of songbirds, and loved spotting the silhouettes
of turkey vultures soaring high above. No detail was too small to fill her with wonder and her
fascination with this world and love for those in it is her legacy.

Sharon was preceded in death by her mother, Elizabeth, and her father, Shirley. She is survived by her daughters, Margaret, Rosalee, Serena, and Kelsey, as well as her sister, Mary Abney. A celebration of life will be held in early November. In lieu of flowers, please make a donation to the local animal shelter in her name.
Funeral Service
Service information unavailable.
Visitation
Visitation information unavailable.
Final Resting Place
General