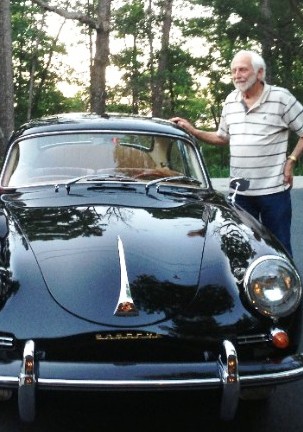 Kenneth (Papa) Smith passed away Thursday, February 4th, 2021 at Avenir Assisted Living Facility in Fayetteville, Arkansas. Ken was a loving stepfather and was called Papa because he was such a generous and kind man to the family that he embraced when he married his second wife Lynn Loess of Eureka Springs, Arkansas on June 30th, 2012. Ken was born in Chicago, Illinois to Victor and Grace Smith on May 21st, 1931.
Ken served as a corporal in the U.S. Army and National Guard. Ken worked as an electrician for Reynolds Aluminum for over 30 years. While serving in Germany, Ken discovered a passion for cars, especially Porsche sportscars. Later, he purchased his own 1960 Porsche 356 Black Beauty that he maintained meticulously and that was also admired by many. Ken loved the outdoors and enjoyed hunting, fishing for muskie, and hiking on walking trails. Ken was a member of the First Christian Church of Eureka Springs, Arkansas.
He is preceded in death by his first wife Marcie Smith and his second wife Lynn Smith.
Ken is survived by his brother Bob Smith and his wife Sandra, his son Eric Smith and his wife Mari and their two sons Nathan and Matthew, and his daughter Karen Delegan and her husband Brian and their two girls Kerstin and Annika. Ken is also survived by step-children Scott Bingaman and his wife Mitzi Bingaman and their three children Braden, Abby, and Alec of Tontitown, Arkansas, Amy Robinson and her husband Troy Robinson and their two children Andy and Elayna of Overland Park, Kansas, Lisa Spellman and her husband Ron Spellman and their children Sarah, Amanda, Chastin, Chelsea, and Colton and great grandchildren of Springfield, Missouri, and Lori Bingaman and Larry Horton of Harrison, Arkansas.
Funeral Service
Service information unavailable.
Visitation
Visitation information unavailable.
Final Resting Place
General