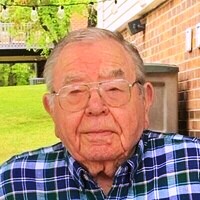 George G. Burgess, Jr. passed away on December 29, 2020 at the age of 94. He is preceded in death by his wife of 64 years, Elizabeth Cullins Burgess; his parents Myra Forrest Burgess and George G. Burgess, Sr.; a brother, Calvin R. Burgess; and a grandson, Travis P. Burgess. George was a beloved father, grandfather, great grandfather, brother-in-law, uncle, and friend.

George was a Patriot, who loved his country and served as a Sergeant in the U.S. Army in Rome, Italy. He was employed by Union Camp Corporation for 40 years, spending the latter part of his career as an Assistant Superintendent in the Pulp Mill.

He loved to travel, but as far as he was concerned there was no place like Franklin, VA. He rarely missed a chance to purchase Fish Fry and/or Pig Pickin dinners to help raise money for various organizations. He was a member of the Charles R. Younts American Legion Post #73 and a lifelong member of Sycamore Baptist Church.

There will be many who miss his “ALL CAPS” posts on Facebook, as well as his “thinking of you” messages.